The RCBA has established the E. Aurora Hughes Meritorious Award for Service.

This award is to honor the late E. Aurora Hughes, who was a past President of the RCBA and was a long-time supporter and participant in many of its activities. Aurora sadly lost her fight to ALS in 2011 but her legacy continues. In her honor, the RCBA Board of Directors established an annual award, which will be presented to its recipient on the night of the Installation Dinner.

(Remarks delivered by Presiding Justice Manuel A. Ramirez at the Annual Installation Dinner of the Riverside County Bar Association, September 19, 2013) 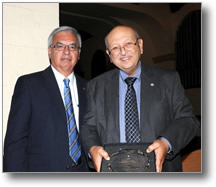 When Jackie Carey-Wilson asked me to introduce my colleague and our friend, Associate Justice Thomas E. Hollenhorst, as this year’s recipient of the E. Aurora Hughes Meritorious Award for Service, my first thought was, how wonderful and appropriate that Justice Hollenhorst should be recognized in this way.

My second thought was, what exactly is the E. Aurora Hughes Meritorious Award for Service?

It’s not that I hadn’t heard of it; of course, I had. But with this being only the third year the award has been given, I wasn’t as familiar with it as, perhaps, I should have been.

I did know, of course, that this was an award established in 2011 in honor of quite an amazing woman. Aurora Hughes lost her battle that year to ALS, or, as we know it, Lou Gehrig’s Disease, and she was given this award that year, posthumously.

I knew Aurora professionally, having met her many times through bar activities, and like everyone else, I held her in the highest esteem and in the highest regard. If the other recipients of the award given in her name are expected to measure up to her standards and her commitment to this community and to our bar association, then you will have your work cut out for you in finding those deserving to receive the E. Aurora Hughes Meritorious Award for Service.

But you did a good job this year. In fact, you did a great job! Tom Hollenhorst graduated from San Jose State in 1968 and received his Juris Doctorate from Hastings School of Law in 1971. The following year, he started working for the Riverside County District Attorney as a Deputy District Attorney.

Now, 25 years later, in the modern era of our court of appeal, Justice Hollenhorst is the longest sitting Associate Justice to ever serve here in Division Two.

Like Aurora Hughes, Justice Hollenhorst’s career has been so much more than just the work of being a lawyer, and in his case, being a judge, as well.

Justice Hollenhorst is also known throughout California and the nation for his work on judicial ethics, with judges statewide and nationally seeking his advice and his opinions on ethical matters. To put this into its perspective, I would estimate he’s given opinions on ethical matters numbering in the thousands – remarkable would be an understatement, given his demanding schedule and heavy caseload over the many years of his career!

Perhaps more telling, however, is that over the past 25 years, Justice Hollenhorst has brought somewhere between 120 and 140 undergraduate and graduate students into his chambers as appellate externs, mentoring them during their time at the court and beyond. In fact, some of those externs, like Judge John Lewis and Kira Klatchko, to name a couple, are highly successful judges and attorneys, who, we can only hope, will carry on his tradition of encouraging students, so that each generation of young lawyers is better and richer in knowledge for having been nurtured by the previous generation.

And finally, let us not forget that Justice Hollenhorst has, for the past many years, judged the final championship round of Mock Trial competitions.

And so, just as Aurora Hughes had diverse and unusual interests – sport shooting, hunting, and writing, to name just a few – so, too, the same can be said of Justice Hollenhorst’s interests, which also range far and wide. You know that movie, Planes, Trains, and Automobiles? Well, for him it would be Planes, Boats, and Motorcycles.

For example, there have been many afternoons when a line of colleagues and staff would form behind Justice Hollenhorst’s car in the parking lot at our court of appeal, and he would dispense packages of freshly caught tuna or some other deep-sea delight on a first-come, first-served basis. He loves fishing – one of his many loves.

Also like Aurora, the thing that rounds Tom out and makes his life its most complete is his family.

His wife of some 42 years, Beth; and his sons and their wives, Tim and Norine, Peter and Christa; and most particularly, his beloved grandchildren, Madison, Jacob, Sean, and Sarah, are all just the joys and the delights of his life. And, I might add, Tom is also known as a passionate dog-lover!

On a personal note, when I mentioned to Tom that I had been given the honor of introducing him tonight and talking about his accomplishments, he shrugged. It was readily apparent to me that he was a little uncomfortable with the attention, and he said, “Manuel, I’m just a plow horse,” to which I replied, “Well, Tom, even a plow horse gets some rest and a fresh bucket of oats from time to time.” What do you suppose his response was? He shook his head and said, “No, not this plow horse.”

I couldn’t get that image out of my mind, so I did a little digging. Do you know that, back in the old days, when a farmer went to auction to get a plow horse, he knew just what he was looking for?

He walked right by all the pretty, sleek, and sassy horses, the ones that caught everyone’s attention and everyone’s eye because they were so flashy or so energetic, prancing around as if to say, “Hey there, farmer, look at me!”

He was supervising some eight to ten attorneys for that year, and he authored an incredible 315 opinions – in one year! That’s a record for our court, and I’m pretty sure it’s a record for any justice in any court of appeal in the State of California, or any other court of appeal, for that matter. Rest assured that each and every opinion was thoroughly read and reviewed by him.

I want to give you another quote, one I think is perhaps even more eloquent, if that is possible, than Mr. Churchill’s, because it is a quote from Justice Hollenhorst himself from the occasion of our recent celebration of his 25th anniversary on our court of appeal. I think it perfectly reflects the heart and the mind of this hard-working, dedicated, great, decent, humble, and wonderful man. He said, and I quote, “The thing is to leave something behind in all our work. If it’s all about me, what’s left? Serve as an example. Do your work, but help others at the same time. Then, and only then, will there be something left.” 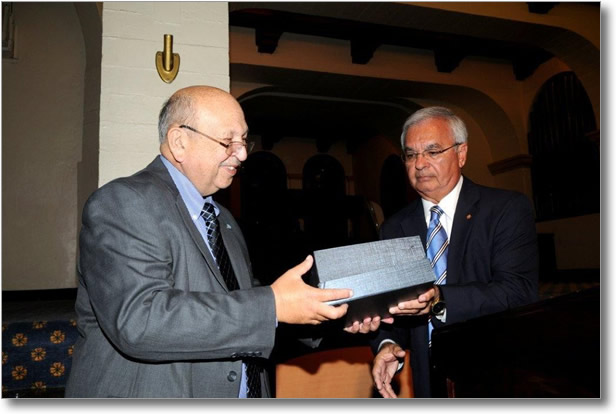